In my third week of exile to Toronto, I began to wonder how long the rest of the bike-theft-free-for-everyone problem would continue. I left my beloved by-the-street-for-two-week cycling adventure in Portland, Oregon, knowing that… 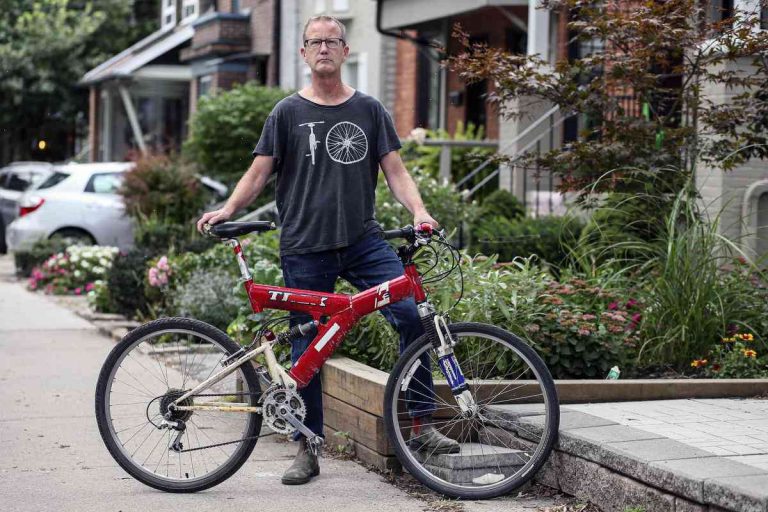 In my third week of exile to Toronto, I began to wonder how long the rest of the bike-theft-free-for-everyone problem would continue.

I left my beloved by-the-street-for-two-week cycling adventure in Portland, Oregon, knowing that I might never see the bike again. On one night, I saw another woman zipping down Clackamas Street with a bike parked near the side of the bike rack; it took her at least ten minutes to secure it. It seemed like the first time in my life that I was seen by more than one stranger, but also the first time when I felt betrayed.

When I returned to Portland, I pitched my bike on Craigslist. The seller gladly took it on consignment for a nominal price.

My estranged bike carrier and I moved to Toronto in late August. Being an international advocate for bicycle justice, I have spent many years in dozens of cities trying to make it easier to rent a bike. My final effort to reform the law in Portland came with the passage of a law that made it illegal to steal another person’s bicycle. I had hoped it might be a step toward making Portland bike-friendly and bike-free, but it did not help me.

I had all the self-assurance in the world that the practice of law would make Canadian bikes safe for me; I never imagined I would, in turn, become the victim of bike theft. Like a voyeur, I watched and waited for the perfect time to pick up the lost bike.

It happened at a crowded baseball game in the Toronto suburb of Pickering, where hundreds of fans waited to see the Blue Jays play the New York Yankees.

The handlebars and brakes were grabbed, but the three wheels somehow remained on my tube, which had been stored in a shopping cart under an overhang. My first thought was to brave the crowds and hop the bus to the nearest TTC station to retrieve my bicycle, but I was otherwise occupied.

So I waited for the waiting masses outside. The time to find my bike was now. Someone must know where it is. At some point, I thought, there must be a bystander, a fan somewhere, curious about a broken-down bike, perhaps moving between the stands and the parking lot, and it would be wonderful if that stranger would help me find my bike.

Someone had a piece of paper where it said “Old bikes are garbage, bring back my bike.” In hindsight, I wish that I had taken that piece of paper. I could have guessed it would be a sign to check out the front of the stadium for some abandoned bikes. While waiting for my friends to arrive to escort me to the car, I studied it carefully: it listed detailed descriptions of parts and repaired parts. No bicycle thief ever knows the style, color, or serial number of a bicycle, but then again, I didn’t. But someone may.

After my two friends arrived, I quietly checked the bicycles lined up under the upper-level arches. On the second to last row, two blue Citi Bikes sat. A teenager may have picked up the bicycle at a house of leisure parking lot, although I suspect that even those people might not recognize a trail bike. I found the teen and thanked him, but he didn’t seem to know how to use the Citi Bike device that would have allowed me to lock the bike. Still, it had been a good idea to take the paper with my own warning in case anyone from the back of the crowd stopped to help me retrieve the bike.

I turned to go back inside to the designated car pool, when I spotted the group of fans surrounding the parked bike, standing along a fence with clear windows.

What should I do? I needed to make a judgment on my own behalf. I would have to come to my own terms. The group was cheerful and willing, and clearly impressed by the scale of the loss. We walked around a side gate and parted until I felt safe enough to open the gate and go inside. When I climbed up the narrow staircase on my back, my heart was pounding. How much weight was the bike really carrying? How much did it weigh?

I left the gate open as I biked back to the car with a boy I had met in pickering. I was exhilarated and guilt-ridden. I wondered if I should tell the police.