‘Eraser-squirrel’ robot might bring U.S. service men and women back from the brink

By Marc Leestmaier, CNN • Updated 16th September 2015 The “eraser-squirrel” in the next “Independence Day” sequel could be the first robotic dog to go toe-to-toe with US service members. An imposing, tank-like prototype… 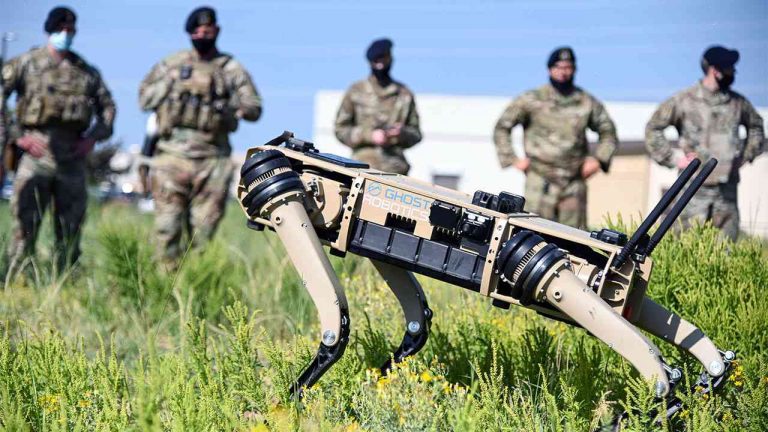 The “eraser-squirrel” in the next “Independence Day” sequel could be the first robotic dog to go toe-to-toe with US service members.

An imposing, tank-like prototype reportedly mimics a real animal on the front lines of battle. But it’s carrying a 16-inch M249 Squad Automatic Weapon that is capable of discharging long distances.

This is no hobbling pup, though.

“When you call in military search and rescue for a casualty, you don’t want to wait until they are turned out of the way,” said Jim McPherson, principal with Sandia Labs in Albuquerque, New Mexico, which is developing the robotic dog.

“Instead, you want to get the casualty out of the way and move them to a more favorable place where medical facilities are.”

The prototype originally worked with a human operator by swiping a radio command to fire. However, it would require a similar handler to fire.

McPherson says the design that he calls the “eagle scope” would instead rely on a “multi-frequency scanner” developed by Sandia Labs and Raytheon that would give a fine-grained read on whether it’s approaching an obstacle like an enemy machine gun and determining whether to engage.

McPherson, who has been researching the technology with his assistant, John Van Dusen, an off-duty Raytheon engineer, said he hoped a future version of the machine would look more like the one depicted in Arnold Schwarzenegger’s 1986 film “Terminator 2: Judgment Day.”

That robot was of the “spectacular” persuasion that was featured in a 2004 episode of the reality television show “Robot Wars.”

At the time, McPherson compared it to someone “who will go after you and kick your ass.”

The US military first expressed interest in the technology in 2008 when Van Dusen and McPherson worked on a low-power program to develop the detector.

The Sandia team is showcasing the prototype at a trade show in Washington this week. It’s available to purchase to the military for research and development.

The company is releasing less information about its research in light of concerns about ongoing war in Afghanistan.

At a panel discussion at the annual Association of the United States Army meeting, Col. Cedric Johnson, the acting executive director of the command’s education and science office, said the US military is not the place to test out such technology.

Johnson said it is a priority to try and avoid “particle beam radiation.”

McPherson said research would take place away from the front lines if possible and no shortfalls in detecting devices could pose a threat.

“If you are a combat search and rescue squad member, you do want to be behind enemy lines,” he said.

“If you are fighting terrorists in Afghanistan … you don’t want to end up behind enemy lines.

“If you could, you would have probably gone in (our), McPherson said. “In case you don’t end up there, you just know that there is going to be the possibility (of getting injured).”